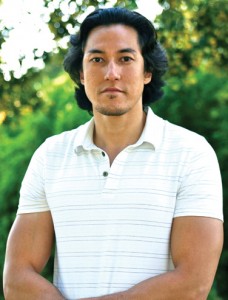 “Like mud that sticks to the soles of our shoes, war has a way of sticking to the human mind and following people home,” writes Paul K. Chappell in the opening chapter of his new book, The Art of Waging Peace. An Iraq war veteran and peace activist, Chappell, whose mother is Korean and father is African American and white, has seen the violence of armed conflict firsthand, but his exposure to the trauma of war started even earlier, when he was a child.

Chappell’s father fought in the Korean and Vietnam wars, and the experiences had a profound impact on him throughout his and his son’s life. “As a child my life was turned upside down when the wars from my father’s past reemerged,” he details in his book. “I was sleeping peacefully late one night when I felt someone grab my leg and drag me from my bed onto the floor. … Looking up and seeing my father, I began to panic as he pulled my hair and told me he was going to kill me. His cursing and my screaming woke my mother, who ran into the room and bear-hugged him until he finally calmed down.”

It is this discussion of trauma that propels The Art of Waging Peace, Chappell’s third book on the subject, and also his most personal. The 33-yearold’s revelations of an intimate history of family violence and internalized racism only further his argument for peace.

KoreAm first spoke with Chappell, who serves as the peace leadership director at the Nuclear Age Peace Foundation, back in 2011 for a lengthy discussion about his background as a multiracial American growing up in the South, how he could be a soldier and a peace activist, and his thoughts on the military-industrial complex. Last month, KoreAm reconnected with the author and activist to talk about his new book, drone warfare, conflict in Syria, shaky North Korea-U.S. relations, and how the ability to wage peace is also a tremendous life skill.

How is The Art of Waging Peace different from your previous books, and why did you decide to write it?

I decided to write a book series because the amount of content I have to cover is vast. Because in order to talk about peace, I have to talk about war, violence, human nature, social and political problems. And I tried to divide up the content, where each book goes deeper, kind of like peeling back the layers of an onion. I had to talk about trauma, I talk about Gandhi and King and civil rights, I talk about peace philosophy and martial arts philosophy, world history, military history, international relations, human behavior. The Art of Waging Peace goes deeper, … it covers some dark subjects, but in these dark subjects, you see light and hope, as well.

I think that the difficulty now is that a lot of peace activists don’t want to talk about violence, war and trauma, but that would be like a doctor not studying disease, illness and personal injury. So I try to talk about my own personal trauma, my violent upbringing and my experiences with racism and other problems, and it not only illustrates the ideas I’m talking about, but it also explains how I came to this point of view.

We’re still at war; we’re just transitioning to a new kind of warfare. … The American public doesn’t like it when American soldiers are killed, so there has been a transition to relying more on drone warfare. … I was watching 60 Minutes, and there was a Marine colonel in Afghanistan, and he said, “If you kill 1,000 Taliban fighters and two civilians, it’s a loss.” It’s a loss because … that’s going to create more resentment and more animosity. If a foreign country came to our country and killed Americans on American soil, how would we react? We would freak out if someone came [in] and killed Americans on American soil.  So drones kill many civilians, and that’s used as a recruiting technique by terrorist organizations, and it doesn’t get down to the root of the problem. If you look at the consequences of these drone strikes, we’re making our country less safe.

Why do you feel waging peace is more effective than traditional warfare?

Going back to military strategy—you have to confront an opponent at their weakest point, not their strongest point. For example, if you had to fight Mike Tyson at his prime, you shouldn’t box with him because he’ll knock you unconscious. If you’re going to fight Mike Tyson at his prime, you’ve got to find some other way than using boxing.  So if you’re fighting a powerful military [like] the British military [and] the British government, as Gandhi was, you’ve got to use another method.  Violence is often like smallpox sores—you’re just scratching the surface, you’re scratching the sores and picking at the sores, but waging peace can get down into the bloodstream and attack the virus.

This year, there have been growing tensions between North Korea and the U.S. and South Korea.  What do you think is the best way to address the North Korean issue and ease tensions?

Many South Koreans think that having the U.S. military on the border provokes North Korea, just as if you had a foreign army on our border. Let’s say that Mexico or Canada had the French or British or Chinese army [on the border], and we were living in a time when those [countries] were adversaries—that would be provocative to us. Many South Koreans believe that South Korea has a strong enough military that, just with NATO air support, they could protect themselves, and having U.S. troops and bases on the border and conducting military exercises provokes North Korea and makes it less willing to consider diplomatic options.

There are people who advocate for the U.S. to close bases around the globe, especially in countries like South Korea, which are more stable.  Is this a viable solution?

How would we react if a foreign country put a military base on our soil?  We would not react well, and there are South Koreans that don’t like it. So the question is: What is the need? We know that when we put military bases in Saudi Arabia, that was one of the motivations for al Qaeda. Many people like Osama bin Laden and the people who became al Qaeda had been our allies in the 1980s, but we put military bases on what they considered their holy land, and that was one thing that turned them against us.

Also, another question we have to ask ourselves is: Can we even afford to maintain these hundreds of military bases around the world, considering our current economic problems and national deficit?

Many people believe a strong military is vital to our survival as a nation and that we are only safe because we have a massive military presence around the world.

It’s paradoxical like a Chinese finger trap: the more you pull, the more stuck your fingers get. You have to realize that you actually have to release to be let go. … It’s the same thing with military buildup. In The Art of War, Sun Tzu wrote that military overexpansion is one of the primary causes of self-destruction. If you look at the Roman Empire, or if you look at the Athenian Empire, if you look at the collapse of powerful countries throughout history, often, overexpansion is a primary cause—and we have the most expansive military presence in human history right now. The question is: Is it making us safer?

Another huge issue right now is Syria, and there doesn’t seem to be a clear route to end the violence.

When you use nonviolence in waging peace, you confront the opponent at their weakest point, which is their moral authority because they are promoting an unjust system. … Look at Egypt and Tunisia—they used nonviolence and they were able to be effective [because] the opponent wasn’t able to justify violence, because even though they had rioting, they didn’t have a lot of organized armed rebellion. Now, with Libya and Syria, you do have a lot of organized armed rebellion, which allows the oppressor to justify using violence, saying he’s fighting terrorists.  In Libya, one of the reasons they won is that they had NATO support—the Libyan rebels wouldn’t have won without NATO support. Now the Syrians don’t have a lot of Western military support, so they probably are going to lose.

That’s why I think nonviolence is the most effective technique, you don’t need foreign military aid. Now, once you do use the violent route—just speaking from a military perspective—the Syrians, if they do not have NATO support, they are going to be crushed and the Libyans, if they did not have NATO support, they would have been crushed as well. The most difficult part of any violent or non-violent movement is reconstruction, what happens after the movement. After a violent or nonviolent movement overthrows a dictatorship, it often takes decades of waging peace before democracy can truly flourish. America’s founding fathers defeated the British Empire in the 1780s, yet America experienced a violent Civil War, and it wasn’t until the 1960s—nearly 200 years later—that democracy started becoming a reality for African Americans.  So like America, the Arab Spring countries have a long and difficult road ahead.

What’s the biggest challenge you face as a peace activist, and how do you keep level-headed?

How do you keep yourself calm?  How do have empathy for the person who disagrees with you? How do you find that middle ground? How do you calm other people down? These are just life skills. Beyond activism, this is useful to have in friendships, in relationships, in family problems, in problems within your community … because calm can be contagious, because calm can allow our brains to function at their highest potential.

If people are angry or afraid, they can’t think clearly, so you have to be able to calm other people down as well.  This is what Martin Luther King, Jr. and Gandhi did so effectively. [They] were getting death threats, and they were able to keep calm. And that not only made them more effective, but it gave them the enormous moral authority they had and helped them gain respect amongst a wide variety of people.

What do you want readers to take from your book?

I want them to feel patience, but I also want them to feel what [Martin Luther] King called the “fierce urgency of now” and for them to feel a call to action, and I want them to realize we have to solve these problems. The problems we’re dealing with now threaten human survival, and taking action now is really a struggle to protect the survival of the human species.