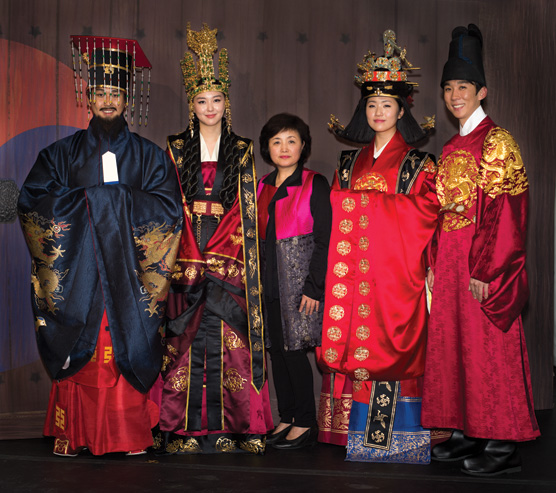 story by CHELSEA HAWKINS
This story was originally published in KoreAm Journal in April 2013.

Men and women slowly floated onto the stage, dressed head to toe in bright, silky fabrics and ornate jewelry, hair knotted up in piles of black braids or heads covered in wide-brimmed hats.

The procession was modeling hanboks through the ages as part of a special event featuring the traditional Korean dress, “Hanbok: Mesmerizing Beauty,” March 22 at the Getty Museum in Los Angeles. One part fashion show and one part performance, the evening showcased the development of Korean dress from the Three Kingdoms period up until today.

Working closely with the Korean Cultural Center in Los Angeles, the show is part of a much larger series of Getty lectures and exhibits running through early June, “Looking East: Rubens’ Encounter with Asia,” which is focused on exploring the rich, centuries-old culture. The series pivots on the famed Flemish painter Peter Paul Rubens’ sketch, “Man in Korean Costume,” from the early 17th century.

“Although Rubens … never visited Korea, it appears that Korea came to him,” exhibit curator Stephanie Schrader said in an email to KoreAm.  “He encountered this vibrant culture through imported, exotic goods brought to Europe from Korea by Jesuit missionaries in China. The fashion show … allowed people to understand why the shimmer and sheen of these robes so captivated Rubens and inspired him to make such a compelling drawing.  The fashion show allowed people to see this attire in full color and in full motion—something that our remarkable black chalk drawing by Rubens cannot provide.”

The evening’s show displayed work by famed South Korean designer Hyun-Sook Lee, the president of Hanboknara Namgaram. Lee’s designs have been spotted in historical dramas, such as Queen Seondeok, Hong Googyung, and Cheondungsori. But Lee not only designs exceptional recreations of traditional dress, she is a scholar, invested in continued research of royal garments.

“The hanbok worn by Rubens’ [subject] is called cheollik,” Lee explained in Korean, referencing the drawing.  “The fashion show was introducing how the appearance of cheollik changed and evolved through the generations.  I wanted to show the variety in types of materials that were used, and how the materials and colors changed, depending on the status of those who wore the hanbok.”

From simple everyday robes to celebratory, elaborate gowns, the versatility and variety of the hanbok was on full display. When a model waltzed out, with a presumed betrothed, a traditional Korean wedding was reenacted; the couple walked to the edge of the stage and deeply bowed to the audience before leaving as quietly as they came in.  The sleepy auditorium was then quickly jolted awake when the traditional percussion performance artists who make up U-So rushed the stage, dancing and drumming. The nearly full auditorium responded enthusiastically, clapping, whooping and celebrating the nuptials.

At one point, a model came out and began to disrobe—much to the surprise of the audience—in order to display traditional undergarments for women “but with contemporary colors.”

“I always thought that one was the prettiest [scene] because the color is beautiful, and it’s something most people haven’t seen,” Lee said. “I think it highlights the beauty of hanbok [when it’s extracted into its individual pieces].  The model we had on stage is a ballerina, and she was able to do a great [job] expressing the beauty of hanbok.”

The fashion show wrapped up with an exploration of modern, redesigned hanboks that reflect contemporary aesthetics and tastes. Music quickly jumped from mellow flute and gayageum harmonies to high-energy electric-pop, and models no longer strolled on stage; they strutted, hands on hips. We were no longer in the subdued Confucian Joseon era, we were in the Seoul of the 21st century.

Acknowledging the global popularity of K-pop music and modern Korean dramas, Lee hopes events like this help shift the gaze from pop icons towards the more traditional.  “Hallyu is on the rise these days, but Korea’s traditional culture is still in the shadows,” Lee said. “I’d like to introduce even a small aspect of Korean culture through fashion. I wanted to deliver Korea’s traditional culture of respect and elegance.”

Narae Son and Steve Han contributed to this report.