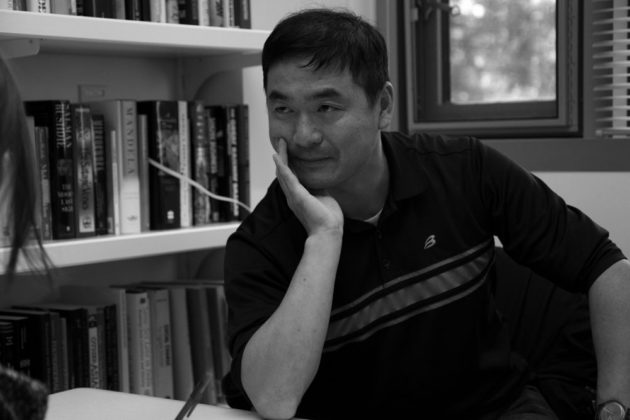 Wooksik Cheong, a representative of the South Korean NGO Peace Network, recently visited UC Santa Cruz to discuss the disputed construction of a South Korean naval base on Jeju Island, a South Korean island off the southernmost tip of the mainland.

Jeju Island, much like Okinawa to Japan, maintains a unique dialect and culture separate from mainland Koreans, resulting in a sometimes volatile relationship between the island and the peninsula.

In 2007, the South Korean government decided to build a naval base in Gangjeong Province in Jeju Island and since then villagers and activists have banded together to protest the construction of the base.

Peace Network, established in 1999, focuses on promoting peace within the Korean peninsula through cooperation, delegation, discussion and the demilitarization of the area.

Literature professor Christine Hong sat in on the interview to assist with translation. Hong has visited Jeju Island and is familiar with the controversy surrounding the naval base construction.

City on a Hill Press: Can you explain the history behind this contested military base? Is this resistance movement part of a much bigger issue?

Wooksik Cheong: Jeju has a very indigenous culture; South Korean mainland persons cannot understand their dialect, so for a long time the people of Jeju have maintained an independent and special culture. However, [historically] the Japanese army used Jeju Island as a platform for an attack on China, so there was an airbase for the Japanese military. After that, the United States controlled Jeju to attack Japan, but the United States changed their mind and sought Okinawa … With the construction of this naval base, the message that the South Korean government and Navy is sending is very similar to the ways the South Korean government and United States used [Jeju Island] 60 years ago. In order to isolate Gangjeong Village from the mainland, the South Korean government, or ruling party or conservative media, has labeled the residents and volunteers as pro-North Korean or Kim Jong-Il puppets.

Christine Hong: But the people who have been protesting have been jailed and they’ve been beaten. As Wooksik was saying, recently even, the mainland government sent over a thousand riot police to quell the protest, so it’s very reminiscent of the past.

WC: The central government does not believe in the local police, so they send riot police to directly control the operation.

CH: When I was in Gangjeong, there were police at every single entrance to the village.

CHP: The Defense Ministry has expressed determination to finish the military base, and has characterized protesters as more of a nuisance, spreading false information. How do you respond to that?

WC: South Korea is a democratic country and the opinions on the naval base are from a variety of spectrums. However, the South Korean government and media are hesitant to [have a] dialogue with villagers. The biggest frustration of Gangjeong villagers is, ‘Why has the government not talked to me about this?’ They’ve just talked to the press and the [police] force. But the idea is this is an issue of … national security … [and] if you express a different opinion, you’re a pro-North Korean, you’re a Kim Jong-Il puppet. Is this a democratic country, then? It’s very shameful. The first thing the villagers wanted [to say] is, “Let’s talk: Why does the government want to build a Jeju naval base?” … If even one more person supported the Jeju Naval base, we could quit the protest.

CH: The government claims that this decision came about democratically, but actually the standard proceedings for any kind of vote within the village were not observed. And I think that it’s very revealing the head of the village is in prison right now. What the government keeps saying is the people protesting the construction of the naval base are obstructing business, so the government is revealing what its notion of democracy is — it’s placing the obstruction of business … above the rights of citizens to determine what they want in the area they live [in], and it has made a mockery of any democratic process.

CHP: Can you tell me a little about “Pacific Freeze”? How do military spending, armed conflicts, and continued military expansion relate to the health and well-being of the environment?

WC: I think the biggest enemy to humanity is climate change. … Unfortunately, the U.S. military budget is up to about 50 percent in the world military expenditure. Think about that: Why does the United States spend so much on the military? Do American people feel safe? I don’t think so. American people are afraid of many kinds of threats. In order for the United States to play a leading role in dealing with global problems, I think they need to [funnel] their military sources into other things, for example the green economy. … [Furthermore,] why is the South Korean government and Navy destroying this natural and beautiful environment? It’s a gift from god, from the heavens. A few years ago, the South Korean government pointed out Gangjeong Province as an absolute preservation area. In order to build the naval base, the South Korean government cancelled the absolute preservation. That means the South Korea government is talking about green economy and green growth. However, the South Korea government is destroying the environment for a risky naval base.

CH: They have lied and said they have done environmental impact surveys, but they have not done any significant environmental impact surveys. And they say their spokesperson in the United States, one of the cultural ministers, Nam Jin Soo, said it would have minimum impact on the environment. The fact of the matter is, one, I’ve called him on the phone and … he’s never been to Gangjeong province. He hasn’t spoken to anyone and … the thing that’s interesting, too, is even when you talk to the women in the neighboring village, they say that the ocean is no one’s to own. It’s clear they are destroying the environment. And when you see the way the protesters were living on the environment, it’s unlike any other kind of sustained reoccupation … and the way that they were living was so in tune with the land …There’s something really profound about the way the protesters were coexisting with the land.

CHP: Looking forward, the latter half of South Korean history is hugely influenced by U.S. involvement — do you foresee a way for South Korea to effectively separate itself from the U.S. military?

WC: For a long time, especially since the Korean War, South Korea has been under the U.S. security umbrella. There are different ways of thinking on this relationship. For example, the past South Korean government hoped that South Korea could be more independent and self-reliant. … The current government thinks the … way to keep security and peace is to strengthen the alliance with the United States — that’s the fundamental thinking of the South Korean government. … Some people want to keep the alliance [with the U.S.], some people think we don’t need the alliance anymore and [the U.S.] cause many problems and should withdraw. Many people think, “Why are we maintaining the alliance? We need to improve our relations with the North.”

CHP: Do you hope to see a unified Korea? Is that end goal of Peace Network’s work?

WC: What is important is not reunification itself but how to reunify. Firstly, we put more value on peace rather than reunification. I think reunification should be realized step by step, gradually through cooperation.  However, the South Korean government wants to unify with North Korea through absorption, but that’s not the right way. I think peace is the best way to realize reunification and peace should be the goal of reunification.

CH: Many people describe peace in military terms and they say peace in Korea depends upon a strong U.S. military presence and a strong South Korean military. [To WC:] What is Peace Network’s understanding of peace?

WC: Peace should be based on demilitarization. … Real peace can be realized … through dialogue, cooperation, trust building [and] respecting each other. For a long time, South Korea tried to enhance its security by enhancing its military power or strengthening its alliance with the United States, [but] many South Koreans don’t feel safe. Even though South Korea spends about 10 times more than North Korea in its military budget and makes pains to align with the U.S. …many people are asking, why are we not secure? Why are we not stable?